In honor of Father’s Day I’d like to give those of you who are experiencing parental wounds some hope in healing them. Why? Because I remember when somebody I love once asked me, “What makes your heart dance?” and I felt something change within me. The reason being that my heart doesn’t dance for nothing but liberation now. For that revolutionary love that Mecca taught me the true meaning of. That the real revolutionaries are good parents. See, some of us wanna liberate the whole world. But you gotta start with bringing that love, peace, and happiness home!

To be specific, I never had strong ties to my blood family. I embraced those who embraced me as family. The streets took me in and the gods raised me up, but I still had to ask myself questions like, “What does it take to break the cycles we saw in our parents and grandparents?” Because some of us are reliving the exact same patterns of unhealthy behavior and want to stop but don’t know how. Do you ever make the time to truly reflect on what your childhood was like?

Or ask yourself, what’s your relationship like with your father?

Here’s a picture of my father and I. I only had him in my life during my early childhood. I remember the little things like how he never left the home, but moments like this, I don’t remember. So if it wasn’t for the pictures, I wouldn’t actually believe it happened. Just a few years ago finding these pictures was tough. I had no memory of my father ever… Well, of him acting like my father. I remember living with him in the same house til I left town at 16. But I don’t remember parenting. I don’t remember hugs, walks, talks, games, advice, attending my important shit, none of that. I do remember him kicking me out at 9 years old. I remember a lot of trauma. There were some years I was missing. It was kinda crazy to see it. And then I started piecing together the story of how I lost my father.

My father was married to a white woman before my mother. She made his life hell. Nearly broke him. Tried to kill me as a newborn. Used their kids as bargaining chips and turned them against him. So by the time I was 8 years old he was in a deep depression and had lost all the will to parent. He argued with my mother daily. Never showed anything I could connect to love. I was running away from home at 10, but I was used to getting kicked out by 9. I left home at 16 for Atlanta. I wanted a new life. It was too much pain in that home. I didn’t know any of what I understand now, so I just figured he was a piece of shit. That he didn’t love me, and I hated him. It wasn’t until I was a grown man that we started talking again. Still, the connection was off.

Now that he’s passed, I’ve read all the letters, poems, and writings he left behind. And I understand him finally. I know his pain. I know his struggle. Most importantly I know his heart. He did what he could. All he could. I didn’t think it was enough, but it was all he had to give then.

Although, he did soften up when he met my babies. He loved them and they never saw his anger. Not to mention, he was proud when he read my books. He was more encouraging than my mother has ever been. It was strange then. But now that I really understand him, it all makes sense. I miss my father nowadays. I didn’t think I ever would. But now that I know I’m him all over again with the passed down trauma and all; I really can say I love that man cause I see him in the mirror.

Now we’re on the same page. So I’m not angry with anyone anymore. Not my mother, not my father, or those who couldn’t do right by me. Though most importantly, I’m not waiting on anyone else to pass before I show them my appreciation. I just brought my mother some flowers and told her thank you for making sure I was a reader. Knowing how to educate myself is what saved my life. Consequently, I became easier on myself. Cause I’m no longer angry with me. Turns out, that’s who I was angry with all along. I ain’t mad about any of it.

So how are you like your father? How are you not? Anyone else noticed how closely we reproduce certain patterns? Whether we want to or not?

Breaking cycles is what this point in time needs to be all about.

You have to start asking yourselves these kinds of questions. Like what about your relationship with your mother? What’s that like?

Because so many of us have mother wounds, yet so few of us speak on it. 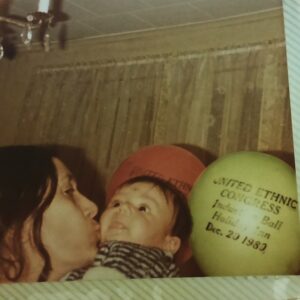 But to illustrate, my own mother and I had our issues for years. It took a long time for us to heal our old traumas and let go of our hangups. She sacrificed everything for me. Even when I felt like it wasn’t enough, it was the best she had. Even though she gave her all, she still used to worry about whether I’d make it to 18. Now it feels like clean air, to of exorcized the demons of our past and reclaim the bonds already written in blood and spirit. We got through the mud. Now I can love my mother the way I love my daughter. Unconditionally, without exception and without expectations. Same as I love myself nowadays. Same as I want for all of you.

Because what’s the most revolutionary unit you can build?

So stop making excuses. Go home (within) today to heal and then go heal your family unit! Above all, it begins with you! If everyone in your family is crazy, start by accepting em! Then you won’t be surprised or disappointed and then you can focus on your healing work. Beginning with who though? Yoooo dysfunctional, always negative bout how it’ll go ass.

Lol revolutionary love is for everyone!

Then the only issue is “What can I do to make things even better?”

HAPPY FATHER”S DAY TO YOU AND YOURS!!!

Lastly, check this out. Shoutout to my pops for putting me on without even knowing… Or maybe he did? Who knows.