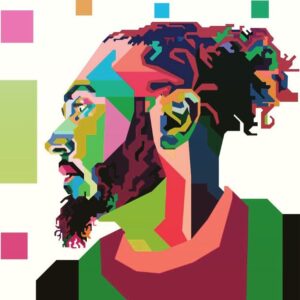 Supreme Understanding is an educator known for over a dozen bestselling titles on self-development and social change. He’s your favorite rapper’s favorite author. Some of his more popular titles include How to Hustle and Win, The Hood Health Handbook, The Science of Self, and Black God. His books have been read and shared by hundreds of famous figures, from Issa Rae and Macy Gray to Lil Boosie and Gucci Mane. What’s his backstory? He’s the child of Bengali immigrants, and grew up in Jersey City in the early 80s, where he became a Five Percenter at 15. Then he left for Atlanta at 16, where he went to Morehouse and became a school teacher at 20. He also started teaching young people in the streets. What did he teach? Knowledge of Self. Despite endless challenges, he earned a doctorate in education at 26.

how to hustle and win: a survival guide for the ghetto

This is the social studies text of the future, explaining the world and its realities to readers who may not even like reading books! This book teaches us how to see through the lies we are told and begin creating a new reality for ourselves.
This is a self help book, but not really. It's a blend of Black history, urban gossip, hood stories, social commentary, game, business education, relationship advice, and the laws of the universe all kinda rolled up into one.

black people invented everything: the deep history of indigenous creativity

Within the past 200 years, Black Americans have drawn on a timeless well of inner genius to innovate and engineer the design of the world we live in today. But what of all the Black history before then?
With wit and wisdom this book digs deeper than the whitewashed history we learn in school books and explores how our African ancestors established the foundation of modern society!

S.O.I.L. - school of indigenous learning at the mosaic museum

Led by Dr. Sujan Dass, a veteran educator, school leader, and curriculum developer, SOIL stands for School of Indigenous Learning.
We offer a child-centered curriculum that teaches and builds with the principles used by indigenous melanin-rich people all over the world for thousands of years before colonialism. At the same time, we learn to use modern technology and resources to accomplish our goals more efficiently!

◊ How to Eat Healthier without Going Broke

◊ How to Overcome Trauma and Reclaim Your True Self

◊ If Prison Isn’t Slavery, why is Literacy so Dangerous?

◊ How to Start Doing Business with NO Startup Money