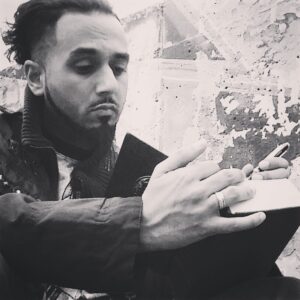 Supreme Understanding is an educator known for over a dozen bestselling titles on self-development and social change. He’s your favorite rapper’s favorite author. Some of his more popular titles include How to Hustle and Win, The Hood Health Handbook, The Science of Self, and Black God. His books have been read and shared by hundreds of famous figures, from Issa Rae and Macy Gray to Lil Boosie and Gucci Mane.

What’s his backstory?
He’s the child of Bengali immigrants, and grew up in Jersey City in the early 80s, where he became a Five Percenter at 15. Then he left for Atlanta at 16, where he went to Morehouse and became a school teacher at 20. He also started teaching young people in the streets. What did he teach? Knowledge of Self. Despite endless challenges, he earned a doctorate in education at 26. His focus? The education he found among the Five Percent.

He met his Earth Mecca Wise at this time, and she encouraged him to publish his work.  Together they ran Supreme Design Publishing until 2014, when Mecca transitioned after a three year long battle with breast cancer. Soon after, he retired from the school system to focus on the education of their children and the continuing legacy of what they’d built together. Supreme avoided lectures and appearances while grieving and reorganizing. Also to avoid backhanding insincere interviewers.

Under the professional name of Dr. Sujan Dass, he’s currently working on a nonformal education system for adults and young people, a mutual aid network of family-based businesses, and steering the masses away from selling their bodies for metaverse knickknacks.

People follow Supreme for his ability to make challenging concepts easy to understand. His expertise covers a range of topics related to personal or social change. In his talks and writings, he draws on his experiences in over 360 cities across five continents. Above all, he draws from his own life and realizations as a father, business owner, and teacher of righteousness.

Bringing Supreme Understanding to your city for a speaking engagement or booking him for an event local to Atlanta is both easy and affordable! For starters, he provides his own air travel, lodging, and ground transportation! Book Supreme anywhere in the world for a one day event or longer.