Sobbing so hard she could barely breathe.

Missing someone no one can replace.

Someone who is everything to her.

How does he soothe her? Get her closer to closure?

Heal the wounds that keep reopening.

Attending to the sensitivities of a sweet little girl.

After a life of trauma?

And failure is never an option.

So he does all he can. All he knows.

Whatever Mecca whispers into his heart.

And somehow… All is well.”

I’m reflecting on the months of me not eating, sleeping, or thinking about myself. When I almost lost my sense of humor, I stopped listening to music, and I let go of a lot of attachments. It mighta looked like I was dying, but I was purging. There was A LOT of toxicity in my system and in the picture above you can see just what losing Mecca to cancer did to me.

After it all fell apart, there was no money, no life insurance, no SDP income, a full house, thousands of business problems that had gone unaddressed, and mountains of debt. Plus it was all on me. People came to kick it, but very few actually came and helped. I lost 40 pounds and went to jail twice the summer before her transition. I was falling apart. Til I sat in that cell and got back in my right mind. Nobody saved me. I had to pick up my own pieces.

So I had to get serious about being CLEAN before I really went hard teaching the world. Now I live to free people of their ropes and chains, especially the ones they can’t see. I imagine others as free as me, while imagining myself as imprisoned as them.

And I love you. I just gotta say that.

Because you can do the same.

Can you imagine a life of real happiness?

You can still get there.

But study the path so you don’t get lost!

Because I’ve been in a prison of grief before and the oddest part was not even knowing it. Grief and depression are cloaks of fog that you often don’t realize are there. So shoutout to everyone breaking cycles! Because as a matter of fact, we’re gonna keep meeting the same teachers until we see the truth of ourselves!

You will be assigned narcissists until you learn your own value and stand up for it.

You will be assigned leeches and parasites until you develop boundaries.

You will be assigned sirens and succubus energies until you transcend lust.

You will be with miserable people until you fully break free of your addiction to misery.

See, some of us are addicted, but we call it our thing because many of us have identity issues. We want to run from who we are. But learn to replace it with breathing though instead and watch the rewards it brings. Because the joy is yours. You deserve it and you deserve to live in it longer than you let yourself!

But if you don’t believe you’re special, who else will?

You want peace and joy? You’ve gotta give it away to get it back.

You want a mate? First you need to be compatible with living.

You wanna change the world? Begin by healing the hurt at home.

Self-care begins with seeing value in yourself. You can’t pour from an empty cup. If you gained nothing else from the pain you gained understanding – the best part. So your first thought waking up should be an opportunity not a challenge.

When you’re wise, you realize it’s always a choice.

In the same way, we all have our burdens. It’s how we carry them. You have to start asking yourself how you want to feel and whether you’re getting in the way. Unfortunately, black people don’t talk about sadness because of fear they’d never stop talking.  I know that breaking cycles of bad energy is difficult, but it’s so much brighter on the other side! So we gotta heal so we can build. Gotta sort through all of them feels! Because inside us all is a buried child ready to be healed. And similarly, there was a time when I wanted to grieve forever and wither away unnoticed… But my children called. Then they gave me a second chance at life, to give them everything I missed. Then Nilani started to say I was getting better at smiling. So you just gotta think differently. I apply this shit to me too. 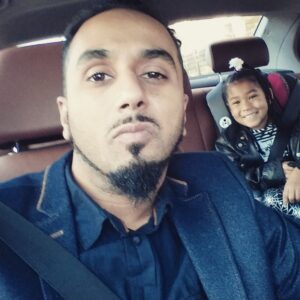 So reclaim the lost parts of yourself and rebuild. Be still and in no time you’ll find your own design fulfilled. So you feel stressed, feel disconnected, and out of it sometimes? It happens. You’re an energetic being immersed in an unreal experience that demands self-mastery of you. Stress is simply the result of being in this world and doing the work. It’s not meant to be easy. That static you experience is resistance and it leaves you with a charge you’ve gotta neutralize. It’s actually one of the things I teach in my “Green Medicine” project. That you’ve gotta find some way to ground yourself from time to time. Everyone’s gotta find their own way, but that way will eventually bring you back to nature. And your nature is supreme. You’re just going through life to realize it. So may you find the light in your despair throughout the process.

Again, I love you.

But make sure you love you too.